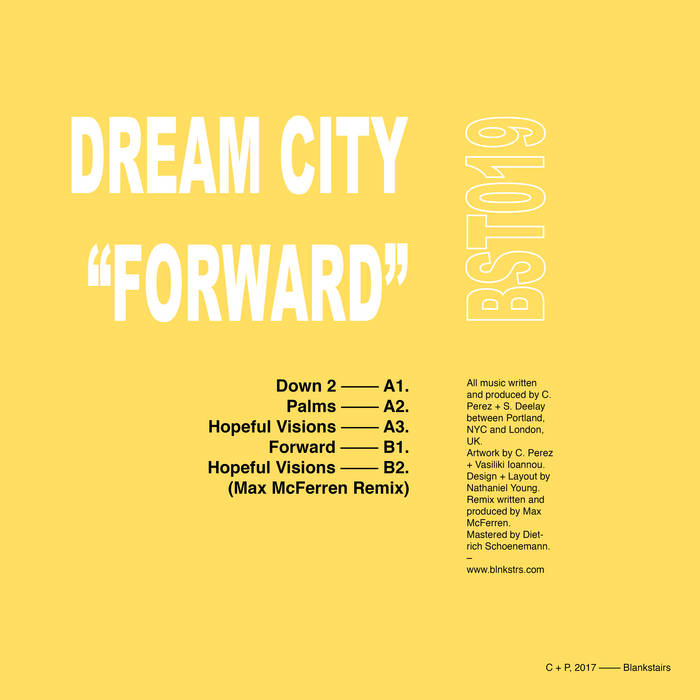 Continuing its conversation between the foggy environs of the Pacific Northwest and NYC’s thriving dance underground, Blankstairs is thrilled to announce its newest release, Dream City’s Forward, a collaboration between S. Deelay and C. Perez (head of PDX’s consistently innovative Pastel Voids imprint).

The project marks an impressively focused exchange for the pair, mixing the deep atmospherics of Perez’s Metropol project with the raw eclecticism and crate-digging expertise of Deelay’s Insane Deelay handle. Having first met several years prior in Portland, the pair has collaborated on and off for several years, including a 2014 release on Pastel Voids, a throbbing, smoke-stained cassette that charted fertile ground for future work. Since then, the pair has followed their respective paths on opposite sides of the Atlantic in recent years, while maintaining a fertile dialogue between their evolving styles and musical vocabularies, one that sees a natural point of convergence on Forward.

The record serves as an exercise between each artist’s honed approach to both DJ’ing and live production, twisting the grooves and functionality of classic jack tracks and bass tunes through a haze of processed electronics and swirling, multi-textured arrangements. Lead cut, Down 2, for instance, spins fragments of classic Chicago acid through an abstracted cloud of synth swells and pulsing bass, while Hopeful Visions slows the pace down, allowing snippets of chopped vocal sampling and swirling pads to pair off against a thudding main figure. These are workouts exploring both patience and density, drawing on the pair’s sense of development and progression to create engrossing, evolving final products that mark a fittingly deep expansion of the pair's ongoing collaboration, and each artist's solo work in turn.

The record features four tracks from the project, alongside a properly misted out, deconstructed re-work of Hopeful Visions by Max McFerren, and an added, digital-only bonus featuring Perez’s Metropol take on Down 2.

Record label based between Portland, OR and Brooklyn, NY.

Bandcamp Daily  your guide to the world of Bandcamp